This is a worked example of building a Linux 3.3 kernel in May 2012. It does not try to list all possibilities, but should provide the reader with a clear, specific path to build a modern Linux kernel. I include timing info (and system specs) to give you an idea how long to expect the steps to take on your system.

I started with an uninitialized (VMware) virtual machine (1GB Memory, 2 processors (2.8MHz i5 760), and 32GB disk). I downloaded using a nominal 6Mbps ADSL.

Note that building a single kernel from scratch (using this method) will use about 10GiB of disk. Be sure you have disk space available before starting. (32GiB provided room for the base system plus two kernel trees).

Using an existing system to download the CD image of Ubuntu 12.04 LTS (desktop 32bit edition) from http://www.ubuntu.com took about an hour.

Scratch-installing the CD on the VM took about an hour. This led to a system that boots. All further work was done on this system.

I ran "Update Manager" from "Dash Home" and let it update. That also took about an hour. You may need to let the system reboot once. You now have a current Ubuntu 12.04 system.

Next, I ran firefox, directing it to http://kernel.org . Clicking on "Latest Stable Kernel" caused the 3.3.6 tree to download (default target ~/Downloads/).

which extracted the source tree in ~/Downloads/Linux-3.3.6/ . This took 1 minute.

Next I installed a recommended package for kernel building (sudo for privilege required to install software on system - it may prompt for your password).

Hit return to tell it to continue. This took a few minutes.

I then installed ncurses to allow the most basic "graphical" config interface (menuconfig).

This also took a few minutes.

Next go to the kernel tree, and begin the configuration process.

In the "General setup" section, select "Local version". Add something to your customized kernel (e.g. initials). 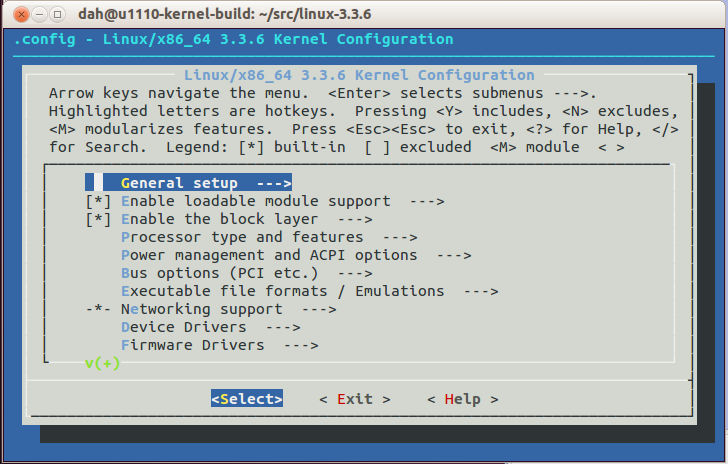 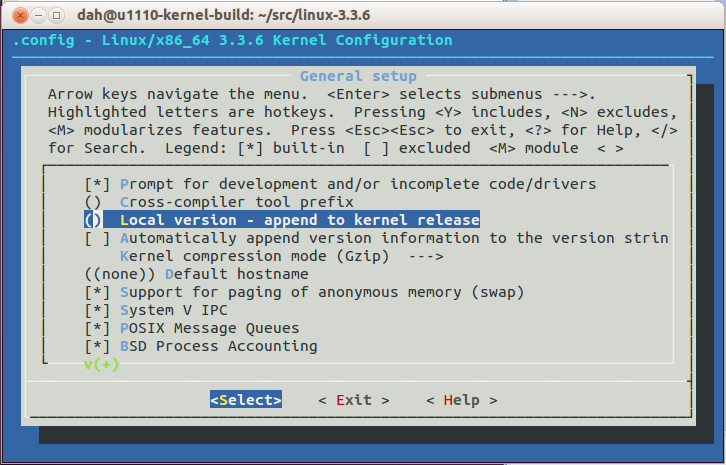 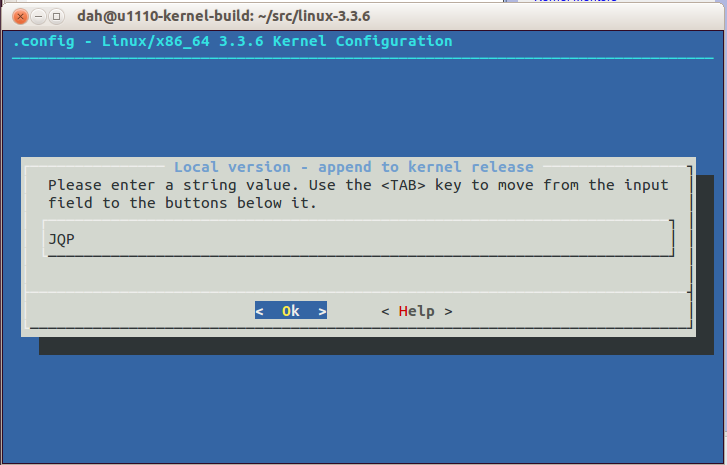 Next, begin making the kernel (takes ~90 minutes) with

Now elevate your privileges with sudo to install the kernel:

These take about 4 and 2 minutes respectively.

Note that this automatically does other necessary updates, including initrd, and updating the grub2 configuration.

(after roughly 5 minutes,) you will come up running your new kernel, which you can verify with

You will see your initials in the name of the running kernel.

Now that you have the basic process working, start making more interesting changes.