The big kernel lock (BKL) is an old serialization method that we are trying to get rid of, replacing it with more fine-grained locking, in particular mutex, spinlock and RCU, where appropriate.

The BKL is a recursive lock, meaning that you can take it from a thread that already holds it. This may sound convenient, but easily introduces all sorts of bugs. Another problem is that the BKL is automatically released when a thread sleeps. This avoids lock order problems with mutexes in some circumstances, but also creates more problems because it makes it really hard to track what code is executed under the lock.

Many changes have been made and gone upstream, but some areas remain that we need to take care of independently:

The problem is in the llseek callback of the struct file_operations. Drivers and filesystems implement it to move the file pointer.

The problem arises when it's not implemented by a driver or a filesystem. In this case, the VFS layer calls a default one called default_llseek() that just changes the file pointer and does nothing else. But to protect against concurrent calls to llseek on a same file, default_llseek() protects this file pointer change using the BKL.

So the strategy is to give a sane llseek implementation to these drivers, once there is no llseek stub, we can start punching default_llseek() (ie: making it modular; build it only if drivers depend on the BKL, or may be an even more granular dependency).

The sane existing implementations are the following:

...and about this protection

Probably the most central part of the BKL removal is TTY layer, which used to heavily rely on the BKL. Alan Cox has been working for years on introducing sane locking to the TTY code that will eventually let us remove the BKL, but this may still take some time to get there.

Also, a patch series from Arnd Bergmann was merged to take a shortcut, by separating the BKL usage in the TTY layer from the usage outside of it.

This series introduces a new Big TTY Mutex that takes the place of the BKL, but follows the normal rules for mutexes:

The first patches convert all the code using the BKL in the TTY layer and related drivers to the new interface, while the final patch adds the real mutex implementation. The new locking rules are shown in this picture: 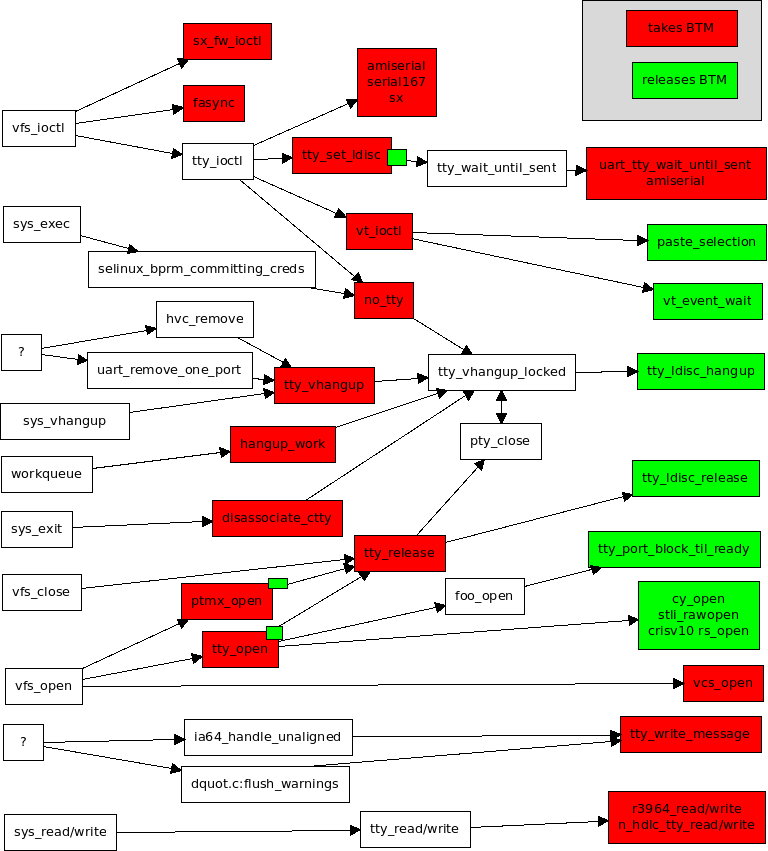 This new lock should get removed in the future as well, but it does not lock against the BKL any more.

A patch was merged to push down the BKL from the common block layer into the individual open/release/ioctl functions of all block device driver. It now needs to be removed from those. The blktrace code also still uses the BKL.

One of the oldest patches to remove the BKL, which still has not been merged is for the file locking. The patch itself should be fairly stable at this point, but there is still interaction with how the BKL is used in the NFS file system, in particular lockd, which runs for its entire life time with the BKL held.

The hard part here is to find out what data structures in NFS actually need to be protected by lock_flock instead of lock_kernel.

A patch series from Jan Blunck removes the BKL from the generic file system mount code by pushing it into those file systems that still need it.

The patches appear to be stable, but have not made it upstream yet as of 2.6.35.

As a consequence of the patches, the majority of the file systems now depend on the BKL.

The BKL gets pushed into V4L device drivers by an existing patch, but most of the individual drivers now depend on the BKL. In general, this should be easy to replace with a private mutex per driver or to remove, but there are a lot of them.

When all the above changes have been done the base kernel no longer needs the BKL, but there are still a number of modules that need it. We need to mark these as 'depends on BKL' in Kconfig or remove the BKL from them, one at a time. Most of them are simple enough that they can be automatically converted to a private mutex using a script from Arnd.